Can you believe that we are almost at the 10 year anniversary of Independence Day? That great day when a very small but very wise majority of people voted Brexit?

My how things have changed for the better since then. We’ve got our country back and it’s all thanks to King Nigel. I wish eternal health and happiness to our saviour and wise dear leader.

I remember when you used to walk through the streets and rarely would you see a piece of street furniture adorned with the flag of England – now renamed Nigeland (thank you spell-checker, though now all politically correct fools are in the correctional facilities, I don’t need to worry about a misplaced ‘r’ and an extra ‘g’) – and we all have responsibility for decorating street furniture. I have now upgraded my house so that in my hallway there is a full-size picture of our great leader – one assumes it is just a matter of time before legislation means an A2-sized framed picture will no longer be enough. And rightly so.

There wasn’t much choice of venues as I couldn’t get a visa to visit Reading – I was thinking of visiting the Irish pub in Reading, or maybe even going to the Belgian Arms near Maidenhead, but both now have massive tariffs that make them utterly unaffordable to the average unemployed bum from Bracknell.

So I plumped for The Admiral Cunningham in Bracknell, a 40 minute walk from my house (about 2 miles and 4 furlongs), through street after street of beautiful Nigeland flags. One of the few pubs now not owned by Wetherspoons. 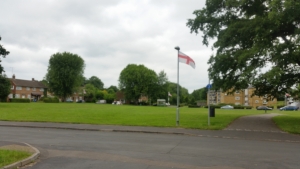 Everyone working there was English (of course, with all foreign and foreign-looking people having been rightly repatriated), and they had a choice of traditional English food and good ol’ roast dinners (all pubs now having to serve roast dinners every day, by law) on offer. 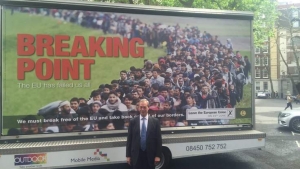 Yes as the king promised 10 years ago – they’ve all gone.

Pork, turkey, lamb, chicken, beef or mixed were the options at either 75 shillings or 80 shillings (£7.50 or £8.00 in old currency). Kids options were available at 40 shillings (£4.00) or super-roasts at 100 shillings (£10.00). Very pricey considering that the value of the pound collapsed in 2016 and has never recovered despite our conversion to new shillings as we took control of our country.

One reason that I was particularly looking forward to visiting the Admiral Cunningham was that it still had the honour of a 1 star food safety rating. Since King Nigel took over, all European food safety legislation has been annulled, but Reading council (who now run Bracknell) are still as backwards as ever, despite being run by UKIP (obviously, given that all other political parties are banned), and those pubs without a zero rating are allowed to keep their ratings. I can only think of a handful of places with any rating so eating at a 1 star venue is a real treat.

I ordered chicken and just like the new British Rail (well, English Rail to be more accurate since the break-up of the United Kingdom), it seemed to be quite slow in arriving but maybe that had more to do with how tired I was. 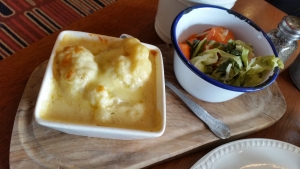 The carrots and cabbage came in the same side-pot and both were soft and succulent, the carrots in particular – a hint of butter and were both surprisingly nice.  The carrots had been straight prior to cutting despite the fact that carrots no longer need to be straight since we left the European Union.

I could have had peas, which as you know are my favourite vegetable (or at least they are now since my time in the correctional facility for my idiotic and unpatriotic vote for remain back in 2016 – amazing what a 4-year diet of cold peas can do to you), however I simply didn’t fancy them, and upgraded to cauliflower cheese instead which was 10 shillings extra.

This also came in a small pot, with a good half an inch of cream (can you remember the days of metric measurements? How outdated – thank God (Nigel) that we have our country back). The cauliflower itself was perfectly done in terms of bite though could have done with more in the way of cheesiness. 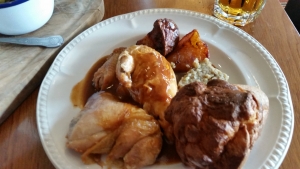 This time of year is one of the lucky times where we can actually get hold of potatoes post import/export-ban. Rumours are that there are mountains of unused potatoes in what is left of the European Union (Turkey, France, Ireland and Albania) – I cannot believe how badly run that shithole is. Even in Ireland they have plenty of potatoes. The two roast potatoes that were supplied to me were quite earthy and dirty, not at all roasted on the outside and semi-solid on the inside, but one has to be positive with what blessings we have nowadays. Crap roast potatoes are better than no roast potatoes.

The Yorkshire pudding was dry, burnt and crispy – and far too brown. Pretty rubbish, really.

There was half a chicken supplied. The drumstick was dry, overcooked and almost a touch stale – as if it has been on the table since last Christmas. The thigh was more appealing, quite soft and tasty with the fat. The breast itself was good enough – although a tad on the dry side. For a half a chicken it was a little small but larger than the old Nando’s chickens before it was banned for being foreign muck (now owned by Wetherspoons and converted to Chicken Chefs).

I do like a bit of stuffing and there was a perfectly rounded-corner square of herby stuffing. It would have been improved were it oven-cooked as opposed to microwaved but so be it. Surprising how they managed to get the corners that smooth and slice it so perfectly by hand, but that goes to show how things have improved under the dear leader. 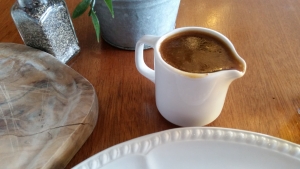 Finally the gravy was good. Maybe I would say that as 4 years in the correctional facility (or Nilag as those of us who have been through it know it as) and the lack of gravy that was part of my punishment for that most disgraceful and unpatriotic decision of mine to vote remain, mean that I am forever grateful but you know, some gravies are still jus-like despite all the posh people having had their estates rightly handed over to the king and now just surviving on hand-outs like me – this was quite thick, albeit gloopy and with a shortage, despite me being allowed a little thimble extra. Which is better than Christmas dinner in the gulag which came without gravy.

Overall I’m going to give a reasonably healthy 4.4 out of 10, which is a good score in foreigner-free 2026. The carrots were the highlight – the lowlight being the roast potatoes, which shows that some things haven’t changed in 10 years, though at least we have control of our country now.

Sadly since the king suffered liver disease and converted to Islam, pubs are no longer allowed to sell alcohol, though there are still underground liquor dens – clearly I cannot allude to the details of any in case I am stabbed with a bayonet on the way home.

I quickly left, via doing a line of gravy powder in the men’s toilets (drugs being unable to enter the country, obviously, as nothing can get in via the giant impenetrable dome that has been built over the country) and headed home ready for an 18-hour shift tomorrow preparing ammunition for World War 3.

Next week is probably my last ever roast dinner review, though I appreciate that I have been saying that for 11 years now.

Time for my hourly prayer to King Nigel. LONG LIVE KING NIGEL. I wish you health and happiness for eternity oh dearest and greatest one. Thank you for taking us out of the European Union, and a massive thank you to everyone that voted to leave in 2016.