I am back from Ibiza. I hope you didn’t miss my Arial-font tones too much. Actually I’m not sure what font I use.

I did consider going for a roast dinner whilst in Ibiza but when I ran it past my dozen or so accomplices, the majority seemed more keen on getting drunk around a beach-front pool with lots of very attractive people wearing very little clothing, then seeking gravy. I don’t think they even took my suggestion vaguely seriously. At 38’C, I did not blame them. I have to admit that I had a very enjoyable time without gravy.

One consequence of a holiday in Ibiza, is that one tends to spend not only the spending money budgeted for, but also the emergency budget, and then some more. So for the Sunday just gone, price was a priority.

Which meant ignoring my fabled random number generator and having to go somewhere within walking distance.

My choice was Bart’s Grill on Wokingham Road. At £8.95 it looked about the cheapest on my to-do list so I set off for a pleasant walk in the July sunshine with mixed expectations. The venue used to be Colley’s Supper Rooms – and if I recall correctly, it had a good reputation…not that I ever went.

The choice was beef or lamb. I fancied the lamb though it was what I had previously reviewed so the only possible choice for me was beef. Except that they only had lamb. Lamb it was.

I had a pleasant 10 or so minute wait in the sunshine with my ex-housemate and the Wokingham Road traffic for company. And a wasp. We could have sat inside as it wasn’t that busy, but it seems irresponsible not to take advantage of the sunshine, at least to make it look like I have been on holiday.

Now the menu gives off an air of difference, especially by offering a grilled tomato. But when it arrived, there was no grilled tomato on the plate. Moving on… 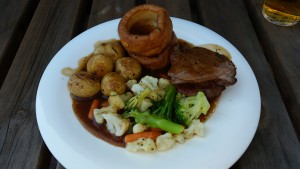 Grilled vegetables were also offered. But there was no sign of any grilling involved. They just appeared to be your standard mixture of pellet—form carrots, broccoli and cauliflower that you buy in bags from the supermarket. That said, they were steamed/boiled to perfection with enough bite to them, yet soft enough too.

There were no roast potatoes. None. Ninguno. Zero. Zilch. Nada de nada. Which I quite admired. Many places simply get the roast potatoes badly wrong. If you look over my reviews, there are two consistent items I complain about – gravy and roast potatoes.

What we got instead was 5 roasted new potatoes. It worked. Don’t get me wrong – I’d rather have proper roast potatoes any day of the week. Especially Sundays. But these roasted potatoes were a simple innovation, and more appreciated than bad roast potatoes.

Let’s jump over to the other item which often goes wrong. The gravy. This was refreshingly, probably the highlight of the meal. A home-made mint gravy with a decent consistency to it. It really improved the flavour throughout the dish, and made the average parts such as the out of a bag vegetables, much more appealing. 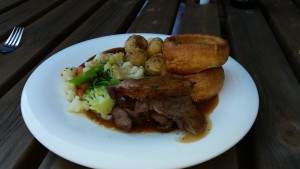 Speaking of being out of a bag, the Yorkshire puddings very much seemed like they were out of a freezer. Slightly larger and flatter than your standard Aunt Bessie’s – they did seem too standardised to be homemade, and were a touch chewy. We did get two each though.

And finally onto the lamb. There were 3 reasonably thick slices, however they were a little over-cooked for my personal tastes – in fact well over-cooked for my tastes – I do like at least a hint of pink and this was cooked thoroughly, and slightly on the tough side too. It was a good piece of meat though.

I enjoyed my meal. I wanted more. It is a shame that they don’t have an option for a large portion as it wasn’t quite enough for me. It is a difficult one to rate as one has to take into account the price, less than a Ibizan vodka Fanta limon – but on the other hand it wasn’t the most-filled plate ever so good value for money but not exceptionally so.

One aspect that bumps up the score slightly was the excellent service, and a real inquisitivity as to what we thought and how they could improve the dinner. They seemed particularly proud of their steaks, with a belief that they have the best steaks in Reading and I am very keen to take them up on their challenge.

I definitely enjoyed my time there and I do want to go back to see just how good their steaks are. I’m giving it a 7.2 out of 10.

Next week I will have been paid and it will be time to go somewhere nice – which I’ll definitely be craving after a week of eating Tesco value carrots.